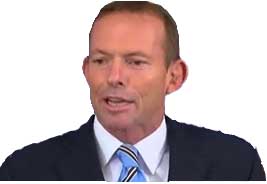 On his way to visit Liverpool Plains farmer Cam McKellar, whose farm is “a world leader when it comes to carbon capture in soil“, Tony Abbott MP had this to say again

st mining on the Liverpool Plains:
“Okay, well plainly the big issue as Senator Williams has just alluded to is the prospect or the threat, if you like, of mining in some of Australia’s best agricultural land. Now obviously we support the mining industry as we support the agricultural industry. It’s important that we have a strong agricultural sector just as it’s important that we have a strong mining sector. The message I am getting loud and clear from locals is that they don’t want to destroy this agricultural breadbasket with mining and the position that the Coalition parties have adopted in the federal parliament is that there is no way there should be any mining in this very important agricultural region until such time as a very, very thorough water study is done and we can be absolutely crystal clear that mining can take place without damaging the agricultural prospects of this region.”
We thank Mr Abbott, Federal Liberals and Nationals for their support. (Full interview)