Repeat offender Santos stuffs up in the Pilliga AGAIN

The EPA hands out little more than a slap on the wrist to Santos for uranium contamination of aquifers near the Pilliga. The offence has attracted a mere $1500 fine, which the EPA claims reflects the environmental damage. Doubtful…. See the full SMH article.

This is after being fined $52,500 earlier in the year for failing to report a spill in the Pilliga. See full article.

The Blackville community has now joined Mullaley and Bundella in declaring itself CSG free.  A fantastic 96.9% of residents voted in strong support of living in a CSG free community.  Other communities on the Liverpool Plains are enthusiastically working towards achieving this aim and results will be posted soon.  This is a strong message to the State Government and local council.  Many thanks to Megan Kuhn who oversaw a team including Sue and Margie Wilmott, Nicky Chirlian, Barbara Ward, Julie Prowse and me.

The Wandobah Community will be holding a meeting to launch its survey on Friday 3rd May from 6pm at the Wandobah Homestead. For information please email [email protected]

CSG production is still continuing in the Pilliga even though there is a risk that the recent 10,000 litre spill is not a one-off spill and may be still continuing in one of the last of the great temperate woodland left in NSW. Environmentalists are not only calling for the NSW Government to shut down the Santos operation at Pilliga but to suspend all coal seam gas exploration licences following the saline spill. Soil and water samples taken six months after the Pilliga spill show a high level of lead, arsenic, chromium, salts and petrochemicals. Hear more on the toxic spill by accessing the following links.

On Sunday 20th November the SOS Liverpool Plains Group showed the documentary Gasland to 70 people at the Quirindi Royal Theatre. Following the movie Rosemary Nankivell spoke on CSG at a local level. Kirrily Blomfield President of SOSLP was very happy with attendance numbers. Kirrily was delighted that many of the audience stayed after the showing of the movie to enjoy refreshments and to discuss the startling facts about CSG that this movie exposes.

The Community Blockade was removed from the Glasserton site near Spring Ridge on the 15th November 2011. The blockade included 24-7 coverage for 19 days. This coverage certainly couldn’t have been possible without the wonderful support from the local community and beyond. CCAG received a number of requests from concerned citizens throughout the State offering their time to assist at the Community Blockade. On the first weekend of the Blockade a couple travelled from the coast for the weekend to support the community and make a stand against Coal Seam Gas (CSG). Thank you to all of you for giving your time to support this community event.

The Community Blockade was removed with very a specific agreement being brokered by Kevin Anderson the local member from Tamworth on behalf of the Nationals. Santos has agreed not to drill at the Glasserton … Read More »

“they don’t give a stuff”

“The Government is broke and they don’t give a stuff about the Farmers”…..
That was how broadcaster Alan Jones concluded the Food Forum held at Gunnedah Town Hall on the 12th October, calling on more people to protest and said “it was up to us to fight for food security”.

Key speakers included clinical psychologist, Dr Wayne Somerville, who warned of the psychological effects for rural communities under the threat of CSG expansion. Dr Pauline Roberts, health expert and until recently a resident of the Liverpool Plains, advocated activism as the only thing that will stop this madness. Drew Hutton of ‘Lock the Gate Alliance’, battling CSG in Queensland, warned that the Liverpool Plains in 2012/2013 could look similar to todays Chinchilla, with over 4,000 gas wells. “The Darling Downs will not only have 40,000 wells, but 20 to 30 coal mines … Read More »

The National Day of Action on the 16th October united Coal Seam Gas groups all across Australia. The first day of National Water Week was chosen as the rally day for maximum impact. Over 10,000 people, in groups from 50 to large rallies of 2000, gathered to show their support for stopping irresponsible mining destroying farm land, precious food resources, underground water systems and natural environment.

SOS Liverpool Plains organised the local event at Willow Tree Park with over 60 community members protesting against CSG. Many travellers called into the stand, with questions about the risks posed by the CSG industry, with concerns about how the NSW Government could jeopardise an area that produces so much food, and put at risk our children’s future environment.

They should be growing food………

Over 100 Farmers were present on Thursday 27th October to launch the community blockade to stop Santos from commencing CSG pilot production at George’s Island Spring Ridge. The second day brought another 90 people to show their support. Our Farmers should be growing our food not manning blockades but the community feel they have no other choice. They are committed to protect our most valuable resources and it is a credit to them.

Kevin Anderson, the local member for Tamworth pledged his support as did Fiona Simson of NSW Famers when they called at the blockade last week. Tony and Lyn Windsor visited on the weekend and Tony is right behind us doing whatever he can in Canberra. Jeremy Buckingham Greens MP and his wife Sarah came over from Orange. Jeremy has lobbied hard against CSG. It was his initiative that … Read More » 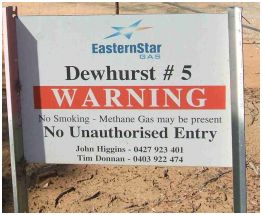