There is no arguing that coal has an important role in Australia’s economy – past, present and future.
So has agriculture.

We are not trying to destroy the coal industry. We are merely fighting for the future of agriculture, an industry which has worked hard for and earned similar significance in Australia’s economy – and which is seriously threatened on the Liverpool Plains by proposed projects at Caroona and Watermark.

In April 2006, the NSW State Labor Government issued BHP Billiton, via its shelf company Coal Mines Australia Ltd, a five-year coal exploration licence EL 6505. BHP paid the government $100m for the licence with the promise of an additional significant contribution from BHP if approval to mine is granted. The exploration licence covers 344 square kilometres around Caroona in the Liverpool Plains region of NSW – recognised as one of Australia’s most productive food bowls, contributing $332m to annual GDP.

BHP Billiton plans to lodge their Environmental Impact Statement (EIS) in early to mid 2015. Although the company has promised not to long wall mine under the alluvial acquifer or the black soil plains, the proposed project still holds a number of significant concerns with regard to water and natural resources.

In August 2008, the NSW Govt issued an exploration licence over neighbouring land at Watermark to the Chinese State owned miner Shenhua. The company paid the NSW Government $300m for the right to explore 195 square kilometres for coal with a promise of a further $375m if approval to mine is granted. Shenhua lodged their Environmental Impact Statement (EIS) on October 29, 2012 and it was on public display from February 28 to April 26, 2013.

The NSW Government and mining companies say they believe there is an untapped coal reserve in excess of 500 million tonnes within the licence area which would support a 30-50 year mine.

Shenhua Watermark is seeking State Significant Development Consent under Division 4.1 of Part 4 of the Environmental Planning and Assessment Act 1979 for the development and operation of an open cut coal mine for a period of 30 years.

According to Shenhua Australia: The Project is located approximately 25 km south-east of the township of Gunnedah and to the immediate west of the village of Breeza. The Project is approximately 282 km by rail from the Port of Newcastle.
The Project generally comprises:
•     The construction and operation of an open cut coal mining operation extracting up to 10 Million tonnes per annum (Mtpa) of Run of Mine (ROM) coal for a 30 year period;
•     The utilisation of an open cut mining fleet of excavators and rope shovels, supported by haul trucks, dozers, graders, blast hole drills and water carts;
•     Progressive rehabilitation of all disturbed areas;
•     The construction and operation of:
o      Coal Handling and Preparation Plant to process the raw coal;
o      Administration building, workshop and related facilities;
o      Train loadout, rail spur and loop to connect to the rail line to Newcastle;
o      Mine Access Road off the Kamilaroi Highway including an overpass of the rail spur;
o      Water management and reticulation infrastructure; and
o      Communications and electricity infrastructure.
•      A workforce of up to 600 full-time equivalent employees during construction and an average of 425 full-time equivalent employees during the operation of the Project.

The  Liverpool Plains are an area of world class agricultural production and value. The soils and climate are second to none and proximity to market gives the area a competitive advantage. The region is possibly the most drought resistant broad acre farming area in Australia, and when faced with food security issues in a time of global climate uncertainty, the area needs to be protected for its productive significance. The people of Australia should not be alienated from their ability to produce food.

The region is underpinned by vast coal and gas resources. The extraction of these resources poses a serious threat to the productive assets which reside above the ground via disturbance both underground and across the system.

A final void will remain in the Western Mining Area and will cover an area of approx. 100 hectares. It will have a maximum depth of 80 metres below the natural ground surface…. The analysis found that partial backfilling of the void would incur a total additional cost of $42 Million, whilst complete backfilling would incur an additional cost of $438 Million… Therefore, in recognition of the further potential coal resources and the ability of the Western Mining Area void highwall to provide access to these resources, the cost / benefit analysis found that the retention of a safe and stable final void in the Western Mining Area was the most appropriate outcome.

Claims that this is a one off project which will not incur future interference with the natural and current environment are clearly misleading. Unfortunately we just cannot take the goodwill claims of these companies at face value, and consequently we are committed to ensuring the protection of the resources in our beautiful region from the outset.

[/tab] [tab title=”Coal Facts”] [spoiler title=”Coal is a non-renewable fossil fuel and is the second source of primary energy in the world after oil, and the first for electricity generation”]

Coal is a variety of solid, combustible, sedimentary, organic rocks that are composed mainly of carbon and varying amounts of other components such as hydrogen, oxygen, sulphur and moisture. Coal is formed from vegetation that has been consolidated between other rock strata and altered by the combined effects of pressure and heat over millions of years. Many different classifications of coal are used around the world, reflecting a broad range of ages, compositions and properties.

[/spoiler] [spoiler title=”Australia is the world’s leading coal exporter. Whether this is something to be proud of in the face of climate change is questionable.”] [list style=”time”] [/list] [/spoiler] [spoiler title=”Coal and agriculture are comparable contributors to the Australian economy in terms of GDP, with agriculture slightly in front.”] [frame align=”center”]

The importance of coal to the Australian economy is often advertised by the industry. It could be said that the industry’s ‘bark is bigger than its bite’.

Indeed, the mining as a whole makes up a figure close to 10% of GDP, however it must be noted that this is not coal alone.

[/spoiler] [spoiler title=”Australia produces almost 70% of its electricity from coal sources, a figure which makes this nation significantly behind in meeting GHG targets of the Kyoto Protocol and a poor performer when compared with other high income OECD nations.”]

Coal is an important source of energy in Australia – much more so than in  many other developed nations. As shown in the below graph, Australia produces almost 70% of its electricity from coal sources – a figure which is outdone by only Estonia and Poland. 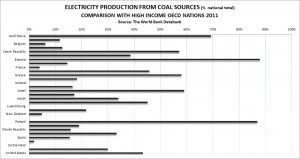 Furthermore, when energy consumption is considered more broadly, Australia is still leading the way in terms of fossil fuel consumption in comparison to our counterparts. We are being proactive about protecting our health and welfare from coal mining. We want to understand the affects this industry will have on us before they may occur. That is why community groups and organisations in the Gunnedah Basin are commissioning a Gunnedah Basin Health Impact Assessment (HIA).

There are clear indications from international health research literature that there are serious health and social harms associated with coal mining and coal‐fired power stations for people living in surrounding communities.

The Health Factor Report – Ignored by industry, overlooked by government.
In May 2013 Doctors for the Environment Australia released The Health Factor Report outlining the potential health effects on communities across Australia from coal and coal seam gas projects. This report describes the failure of governments and resource companies to protect human health. It reveals cases where coal projects have been allowed to pollute at levels known to compromise human health and where inadequate monitoring of air quality disguises the dangers. The report describes how cardio-respiratory and other diseases in nearby communities are likely to be caused or exacerbated by pollution from coal mining and transport. The Health Factor reveals the costly legacy unfolding for Australia from under-regulation of the pollution caused by many resource projects. The report advocates for health impact assessments to be a mandatory part of the approval processes for any polluting industrial project.

The purpose of this report, released in October 2012, is to provide an objective overview of the available international and local evidence from the health and medical literature about the health effects and social justice impacts of coal mining on local communities and to discuss and relate these issues to the Hunter Region of New South Wales.

The following excerpt from the report is noteworthy:

Adults in coal mining communities have been found to have:

Children and infants in coal mining communities have been found to have:

Adults (and whole population) in communities near coal‐fired power stations and coal combustion facilities have been found to have:

Children, infants, and fetal outcomes in communities near coal‐fired power stations and coal combustion facilities have been found to have: