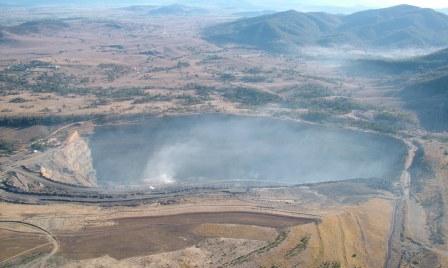 Coal is not just a source of carbon, but also contains a mix of toxic minerals that are released when coal is dug up. These are liberated into our environment via coal dust, (ending up in our drinking water and the air we breathe) and by the burning of coal in power stations.

These heavy metals include lead, mercury, cadmium and arsenic. It may be argued that these are only present in very small amounts, lead for example is present at around 9 parts per million (ppm), but this equates to 9g of lead per tonne of coal. With each uncovered coal train wagon that passes through our towns carrying nearly 100t of coal, there is nearly 1kg of lead within each wagon’s load. Current trains pull up to 42 wagons and there are many of these uncovered trains going through towns every day. The World Health Organisation has reviewed the safe exposure limit of lead from 10 millionths of a gram per decilitre of blood due to recent neurological studies on children with lead poisoning, carried out at Harvard University – which concluded there is no safe level of lead exposure for children.

Towns of the Hunter region are already exposed to such environmental pollutants. The National Pollution Inventory, (the government’s own figures), shows that Singleton receives nearly 1 metric tonne of lead a year from mining – add some coal fired power such as at Muswellbrook and the figures increase again. If you add up all the heavy and other toxic metals emitted into the atmosphere from mining in Singleton – it receives 70.3tonnes a year; whereas a rural town, take Quirindi for example, has it’s current light industry adding just 0.4kg per year.

These metals are taken up by children’s bodies more readily than adults, because they’re growing and have faster absorption rates and fewer defences. In children, heavy metal exposure increases the risk of birth defects; causes permanent neurological damage, bone problems and mining communities in general have been shown to have higher rates of cancer, kidney and lung problems and cardiovascular disease.”

What is also extremely concerning, is that coal also contains uranium. A 1000 MW coal fired power plant needs around 4 million tonnes of coal per year to operate. With uranium at levels of 2ppm in coal, this means 8 tonnes of uranium released into the environment from such a power plant in just one year.

These concerns are recognised by other countries, which only purchase Australia’s coal if it has been washed of some of these impurities. So the coal companies wash the coal, with large quantities of water – contaminating our supplies – to provide a cleaner product for overseas customers, while in Australia we burn the dirtiest coal dumping the toxins on our communities instead. Coal is currently under the spotlight with carbon emissions, which could be offset through a carbon trading scheme, but what is the point in saving the planet, if we’re going to continue to poison its inhabitants?