4 Corners presented the facts, then you responded :-

‘As soon as I can come and join your protest, I plan to. I admire your moral courage!

‘Many of us over here in the West are right behind you!’

‘I immediately asked all my friends on facebook to join and if there is anything else I can do to help, please let me know! ‘

‘I just want to offer you moral support and a $10 donation (I am a pensioner). I am so angry I can hardly think straight. Good luck. I’m praying for you.’

And they kept coming. More of your responses are here, including a heart felt poem on what we are losing.

Mandate to carry on Campaign

Monday night, ABC TV Four Corners gave a resounding endorsement of CCAG and the community blockade. In a thorough investigation into the mining V’s farming standoff, Four Corners has shown that farmers have justifiable concerns in not trusting the mining companies.

Interviews with representatives from BHP and the Minerals Council clearly showed the reluctance to discuss risks involved with mining this area, and to categorically omit these unique plains from their mining plans.

Lee Rhiannon MLC and Tony Windsor MP joined over 200 people at the 1 Year Blockade Anniversary Thanksgiving Party on Saturday.  This community-based blockade on the Duddy’s property at “Rossmar Park” has been going ONE YEAR, solid as ever in preventing access for further damaging coal “exploration” on Prime Agricultural Land until an independent, catchment-wide Water Study is signed and funded.

Representatives from the Anglican, Catholic and Uniting churches delivered an uplifting service of thanksgiving in the glorious sunshine. Rev Peter Brain, Anglican Bishop of Armidale diocese, gave an inspiring address, in which he gave thanks for our productive land, our precious water supplies and our strong and resilient community. Everyone then enjoyed a hearty lunch of stew, damper, mulled wine and sticky date pudding laid on by the women of the SOS Liverpool Plains.

We are looking forward to seeing … Read More »

Most speakers highlighted the clear threat to water supplies from this industry and the extraordinarily permissive nature of State governments legislation when it comes to coal and gas mining versus the evisceration of private property rights.  Federal MP, Tony Windsor, highlighted the Australian government’s recent creation of the Murray Darling Basin Water Authority as one method by which critical water supplies in food bowls could be protected from now on.  We certainly hope this independent authority will lead the way.

Intro to ccag in Joomla

if it is published, it can appear on the web site to a site vistor!!! But it must be published to be visible externally by eg accessing by direct link. Also if published, it can be found by a site search. It is set to require User Log in.

This is a very much a work in progress . As of 1/7/09, ccag.org.au was migrated from Joomla Ver1.0.x to Joomla V1.5 and rehosted, after a full rebuild.  Google ‘Joomla’ for info. In the course of this, site directory structure was altered to clean up and simplify legacy files. Consequently all image and pdf links needed to be reset or checked … Read More »

No markets, no mine: mining’s about making money not communities 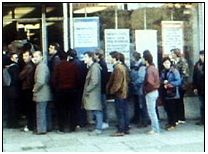 In an eerie reminder of Gunnedah’s fate in the 1980s, when coal mines shut overnight and the displaced miners picketed for a year to get their jobs back, without success, mining companies like BHP are once again sacking workers and throwing whole communities into disarray without any notice or preparation.

Such is the nature of the mining company beast – people are merely economic units to be used and abused and sacked by text message.  Get in, get out – leaving human and environmental devastation.

Prime agricultural land and its precious water supplies will still be feeding and employing Australians for generations to come.  That is what we are fighting for – and the rural communities that have stuck together throughout good times and bad.

Wednesday’s ABC 7.30 Report on BHP’s astonishingly abrupt and furtive exit from its nickel mine at Ravensthorpe in WA is a prescient warning of this mining giant’s real commitment to the communities it invades.

We have been warned.

In a speech to State parliament last week, MP for the Upper Hunter, George Souris, called the Planning Department’s new excision of underground water supplies, from Metropolitan Colliery’s long-walling plan, a precedent that should now be used to protect the valuable aquifers under the Liverpool Plains Prime Agricultural Land.

Mr Souris urged the Planning Minister to apply the exclusion criterion “where unique agricultural and environmental benefits are so great that coal mining should never be allowed to occur”.Read the full Hansard statement here.