Twenty-four hours after voting to support legislative changes to protect Murray-Darling groundwater systems and farming lands from the risks of large-scale mining, the National Party has ‘gone to water’  itself and sided with mining interests.

Caroona Coal Action Group spokesman Tim Duddy said he was disgusted that the National Party had abandoned its core constituency in a decision vital to the future of farming in this country.

“On Wednesday,  National Party members stood in the Federal Parliament and told us how important it was to support changes to the Water Amendment Bill 2008 that protected some of this country’s most precious agricultural land from mining impacts ” Mr Duddy said.

“Overnight, presumably after a little persuasion from the mining industry, they suddenly go to water and reverse their position. No wonder rural Australia has lost all trust and faith in them. “ … Read More »

…that any water study carried out on the Liverpool Plains must be a scientifically rigorous, catchment-wide, independent and transparent process and that its results must be acted upon in government planning decisions.

After touring the prime agricultural land of the Liverpool Plains yesterday and visiting The Blockade site, Ms Allan was keen to take and answer the communities’ questions and hear concerns about the ongoing process of ensuring that an appropriate water study was set up.

Ms Allan clearly understood community concerns that even the most rigorously planned water study could be ignored under present NSW planning processes and that all responsible departments, especially Planning, needed to be … Read More » 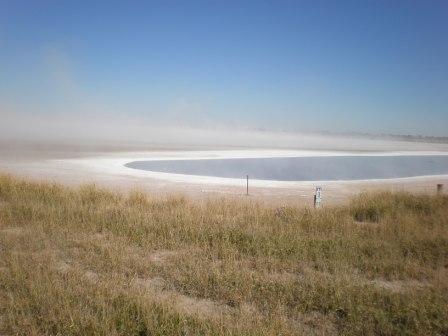 With Australia already on NASA’s desertification watch, and the rapid ingress of salinity into the meagre 6% of land Australia relies upon to feed her people and those of other nations, one would think pumping highly saline water from deep coal aquifers onto the surface, in order to liberate methane gas, would be unthinkable.

Unfortunately not.  Hundreds of once-grazed hectares are also sacrificed to evaporation ponds in NSW & QLD to ‘store’ this waste water.  As the ponds dry out, salt storms carry hundreds of tonnes of wind-blown salt and other contaminants onto the surrounding agricultural land and into our river systems, scalding and poisoning the land and water.

Allowing such willful environmental damage makes a mockery of regeneration work to stop the spread of salinity; of buy-backs to improve the quality and quantity of flows in the Murray Darling as … Read More »