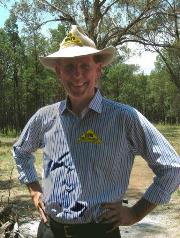 Further Federal support for Food and our independent, catchment-wide water studyThe latest high profile visitor during the Caroona Blockade’s 15th week was Bob Brown, Leader of the Greens, accompanied by Independent MP Tony Windsor.  Senator Brown, champion of many environmental campaigns, spoke thoughtfully to the gathering of farmers, locals and mayors about the increasing loss of farming land around the world and the pressures of population growth on food supplies.

Turning to the threat to our water supplies, Senator Brown said: “I have committed to ensuring that there is an independent study on the effect of mining on the aquifer when the Federal Government’s Water Amendment Bill comes through the Senate [and] I am hopeful that the support of the Greens, Independent Senators and Coalition will mean that the Federal Government must look at completing this independent study before BHP’s exploration … Read More »

Signs of the Times SOSLP Sydney was out in force at the
Rally Against Inappropriate Development, 19/10/2008

Yellow signs and what they mean – it’s time to protect our prime agricultural land from short sighted, inappropriate development –  are spreading.  They are over the border in Queensland, where the food bowl Darling Downs are threatened; they can be found on Haystack Plains near Jambour where the  poignant video, “You can’t eat coal for breakfast”, originates, and around scenic Gloucester and Stroud in NSW where the productive river flats and pristine Mammy Johnson river are also threatened by inappropriate mining licences and weak regulation.  But the signs are not just on the land.  Signs are to be found in Sydney and Brisbane because city people and their kids are becoming increasingly concerned about the quality and security of their clean food and water.