One of the reasons we struggle with any mining company declaration that they won’t do something environmentally damaging is that, when push comes to shove, they usually do once a mining lease is granted, in concert with a remarkably lax attitude at the Environmental Protection Agency who purport to protect the environment.

Duralie coal mine’s recent application to have its licence conditions changed, so that it can dump dirty water into the pristine Mammy Johnsons River in Stroud, is a case in point.  Even though Minister Craig Knowles said on granting the mining lease “There shall be no discharge of dirty water from the mine to Mammy Johnsons River” and Frank Sartor said explicitly, on granting a mining extension in 2006, “In approving the project, I have insisted on a number of environmental measures to minimise its impact and protect Mammy … Read More » 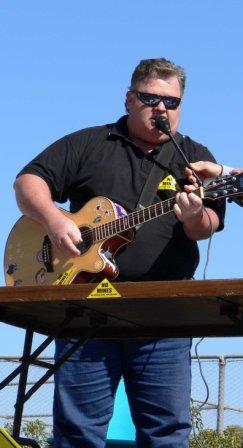 Maintaining the Rage and Bringing it On!

Gunnedah was treated to its own example of People Power on Tuesday as over three hundred clean air, clean food and clean water supporters Rallied for their Rights outside the town’s Civic Centre which was holding the Gunnedah Basin Coal Conference. Whilst supporters came from far and wide, conference delegates were few and far between, for some reason not using the front entrance. Why does People Power frighten mining companies? Could it be they know that we know they extract far more than just coal from the health and wellbeing of the community and environment surrounding their mines?

MPs Tony Windsor (Ind,), Lee Rhiannon (Greens) and Trevor Khan (Nat.) addressed the crowd with Tony Windsor stating that he had no doubt People Power would win this fight for food and water on the Liverpool Plains, … Read More »

* In April 2006, the NSW Government issued BHP Billiton (via its shelf company Coal Mines Australia Ltd) a five-year coal exploration licence EL 6505. BHP paid the government $123m for the licence.* The exploration licence covers 344 square kms at Caroona in the Liverpool Plains region of NSW – recognised as one of Australia’s most productive food bowls.* The NSW Government and BHP Billiton have already indicated their belief that there are in excess of 500 million tonnes of untapped coal reserves within the licence area on the floodplains.* Under the 5-year licence, BHP proposes to drill approximately 300 core holes up to 600 metres deep across the licence area to determine the quality and location of coal deposits.   * It is BHP Billiton’s intention, if granted approval by the NSW Government, … Read More »

“BHP is not considering open cut mining on any part of the Caroona ELA”.

For now.  Note that ‘considering’ is in the present tense.  CCAG call on BHP to rule out open cut mining on any part of the Caroona ELA and guarantee that they will not pass the lease to another mining company to open cut the Caroona ELA either.

Where are they going to put their extensive, heavy mining infrastructure?   Do BHP intend to clear cut Doona State Forest to make way?

CCAG call on BHP to rule out placing their coal elevator, washing plant or coal loader on Doona State Forest, an important piece of remnant pilliga scrub habitat and a place of great significance to the Kamilaroi people.

Keeping the political pressure on

We’d like to thank the support we’re getting in both State and Federal parliaments for an independent, catchment wide water study and a moratorium on mining on State Significant agricultural land.  Questions by Tony Windsor (Independent, New England) and Mark Coulton (Nationals, Parkes) in Federal Parliament this month have seen Federal Ministers Penny Wong (Climate Change & Water) and Peter Garrett (Environment) playing pass-the-parcel with issues that should surely receive far more attention than a game of State and Federal ping pong.  We, the people, expect better.

Given past experience, and government game playing, the apolitical CCAG believe People Power is the only way to make Ministers like these accountable to the People and Country they serve.