For her latest porkie-laden fairytale in the Northern Daily Leader (11/08/08) that: “mining and other land users happily coexist.”

Tell that to the farmers who’s water supplies have dried up; to the farming communities whose health has been affected; to the towns that become fragmented by the “fly-in, fly out” workers; to the councils who can’t fix the roads fast enough from heavy truck damage; to the farmers and communities outside the mine licence devastated by noise, dust and pollution for which the mines bear no … Read More » 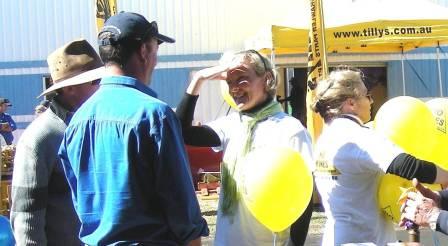 SOS Liverpool Plains are at it again at Agquip this week as part of the NSW Farmers stand (G24). Cakes, NO MINE signs and ballons flew off the stand as people signed petitions and sent a postcard-to-the pollies to register their disgust at NSW planning laws and mining companies’ environmental vandalism. The ladies were thrilled at the response to their informational efforts with many Gunnedahshire residents pledging their support for keeping Australia’s most valuable food bowl as a producer, not a polluter.

Comments from Muswellbrook teenagers were most poignant: “You don’t want mines here, we should know, we get the asthma and are off school so much with sickness”. We don’t want, or need, mines here either. See you at Agquip!

The Whoppers are Bigger at BHP! 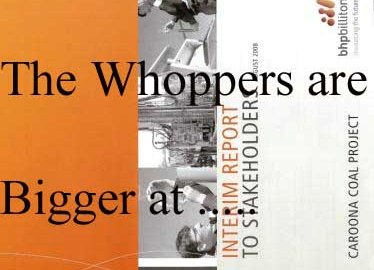 As Joseph Goebbels, Head of Nazi Propoganda said: “If you tell a lie big enough and keep repeating it, people will eventually come to believe it.” Not at Caroona, the People here are not so easily fooled.

Read all about it

For a comprehensive update of where CCAG is at in terms of our fight for food, fresh water and people’s rights, see here.

We thank you all for your support – the donations of food; the lend of a portaloo; those who man the blockade by the fire; the trucks carrying the CCAG message statewide; the shops selling our stickers; the yellow signs on farm gates and highways; the cash and the calls; those writing to pollies demanding better service; those donating their services; the media for giving us a fair go; those singing and playing our song, Bring It On, and those many, many people who are united behind us in the community bringing their skills and enthusiasm to our cause.

Two weeks into our blockade, we’ll be sure to keep you posted as events unfold.