Where is the Blockade? The Blockade is on the Rossmar Park road, north of the Caroona village.

Still not sure? Just ask any passing Koala! Kamilaroi women and elders of the Walhallow community performed a traditional smoking ceremony and raised the Aboriginal flag this week at the site of the blockade as a further show of support for the community’s stand against BHP’s mine planning ‘test’ drilling at Rossmar Park.

As the fire crackled in the background, the group fell silent as Patricia Duddy read from William Telfer’s 19th Century account of the history of the Kamilaroi people. White and coloured hands were joined together for the protection of these important traditional lands and in recognition of two centuries of association of graziers and local aborigines in the Caroona area

People Power – did you know?

Awaba open cut coal mine at Lake Macquarie was stopped by People Power in 2007, after a sustained and vociferous nine month battle, just prior to the State election. The seat was a Labor marginal and went to an independent.

A planned diesel-fired power plant near Port Macquarie was stopped by People Power in June 2008 when the local council withdrew its support and refused to sell land for the project after an extensive community campaign. The Nationals-held seat in the area is about to face a bi-election.

What do these two examples of people power have in common? Correct. Sustained action by the community on political parties that are terrified they will lose seats. Not do the right thing by their communities, but lose seats. We trust that with council elections coming up in September, and an increasingly unstable State government, … Read More »

Steve Charles and Wendy Wood (pictured) have joined forces to write and record a song commemorating “the brave and outstanding action taken to try and halt access to the Duddy’s farm”.

The Duddy’s refused access to BHP to their farm who subsequently went to court and obtained an injunction against the Duddy’s. Members of the local community, however, not affected by the injunction, took over the blocking of access to the Duddy’s property and are now manning a daily blockade of the access road to the … Read More » 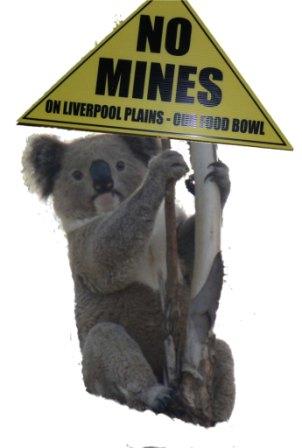 Nearly 200 people turned up today at Duddy property “Rossmar Park” to protest against BHP’s business development drilling. At very short notice, farmers and concerned residents gathered to protest against the continuation of this process without a full, independent, catchment-wide water study to determine the effects of deep drilling on the underground aquifers of the Liverpool Plains.

The community knows: we cannot afford to have these water supplies damaged, cracked, polluted and drained away. The aquifers grow our food and provide water for people, animals and the environment. The miners do not understand this or they would not be mining here – there is no ‘damage free’, half-way house as BHP’s extensive environmental damage from long wall mining down South already shows.

Our thanks to each and every one of the 356 people who attended the SOS Liverpool Plains ‘Film & Forum’ on Wednesday night at Quirindi RSL.

The audience was visibly shocked to see the damage caused by long wall mining in NSW depicted in the second Rivers of Shame film. That there has to be a second film underlined how little the NSW government cares about the damage to water supplies caused repeatedly by coal-mining and the total failure of ‘remediation’.

Personal accounts, from those who currently experience coal mining in their communities, were shared: the disturbed sleep, the failing health, the shattering of community spirit and amenities, the promised economic boom that doesn’t come, the unacceptable pollution and poisoning of the people, land, air and water that does.

It’s taken the government two years and a lot of tax-payers money to find out in its long-awaited, southern coalfields inquiry what RiversSOS and other community groups have know for over 10 years: that coal mines damage rivers and aquifers, destroy bush, cause unfixable subsidence to homes, water courses and land.

This Wednesday, 16th July, SOS Liverpool Plains & CCAG will hold a public meeting at the Quirindi RSL from 7.00pm to discuss some of these urgent problems and the costs we, the community, will be expected to bear if mining goes ahead on the world-class Liverpool Plains.

Come and see the latest evidence of mine damage, listen to mine-affected community members talking about the untold negative health and socio-economic effects, understand the draconian planning laws … Read More »

Time to draw a line in the soil

Wednesday’s ABC 7.30 Report on BHP’s intention to mine some of Australia’s prime land clearly outlined the fallacy of mining on the Liverpool Plains, a food bowl which produces even in times of drought.

Prised from behind his Melbourne desk, Phil Clark’s ‘excitement’, for the sunset industry project, looked rather unconvincing as he stated that BHP had “another 3 years before they put forward any application” and that of course they had to stay away from where the water is. BUT, how would they know where the water is? They’re not monitoring quality, quantity, flow. They’re not calling for an independent, catchment–wide water study. The truth is somewhat simpler as other mining communities know – mining companies don’t know, and mining companies don’t care.

A rather shadowy-looking Mitch Hooke, a spinner for the Minerals Council, feebly attempted to greenwash … Read More »